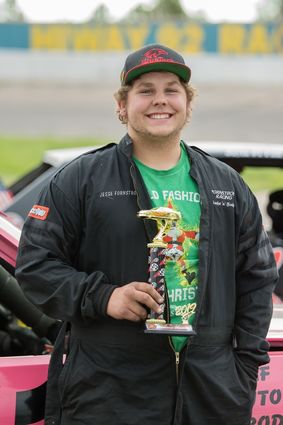 Above left: Jesse Fornstrom with his trophy for his victory in the Trophy Dash.

Jesse Fornstrom, from Pine Bluffs is in his third year of Super Stock racing at HiWay 92 Raceway in Gering, Nebraska.

He was bit by the racing bug through his Uncle Clint Fornstrom.

Along with his cousing, Doug Fornstrom they would take alternate weeks driving their car, until each received their own.

Fornstom is the son of Zach Fornstrom and Natacha Gaspar, and is a senior at Pine Bluffs High School.