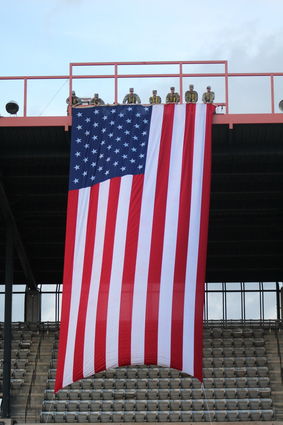 Above: Members of the United States Air Force, stationed at F.E. Warren Air Force Base, Cheyenne present the Flag..

The Last Cowboy Standing started with all the fanfare that one would expect of the National PBR. Fire and fireworks lit up the sky as Cheyenne was introduced to the top forty bull riders in the world.

First out of the chutes was Marco Eguchi, a twenty-nine year old Brazilian rider who is ranked twenty-first in the world. As he flew from the chute on Southern Style it looked like he might pull off his eight-seconds, but with an unexpected belly roll early on, Eguchi was ejected with a buck off time (BOT) of 2.9 seconds. A disappointing start to the evening.

With a name like Anthrax you would expect one heck of a ride, and this bull did not disappoint. Ranked the number fifteen rider in the world, 20 year old American cowboy Daylon Swaringen came out of the chutes with sheer determination, but it was not enough to keep him astride a bull like Anthrax. With a BOT of 4.56 seconds Swaringen was thrown to the ground, and Anthrax claimed yet another victim.

And so went the rest of the night. Some amazing rides were given and more than a few cowboys suffered dramatic losses at the hands of some of the toughest bulls the PBR has to offer. Standings at the end of the night, moving into the finals on Tuesday evening went as follows: 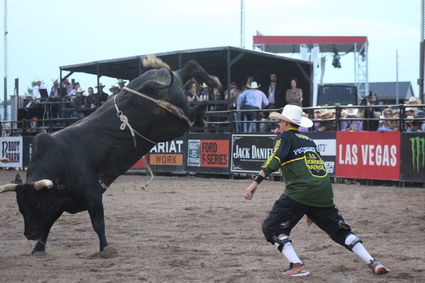 Above: Anthrax the Bull takes on another rider - Wrangler Cody throwing him off to the ground.

The PBR will host the final night of The Last Cowboy Standing on Tuesday night at the Cheyenne Frontier Park.