Fall is for Harvest 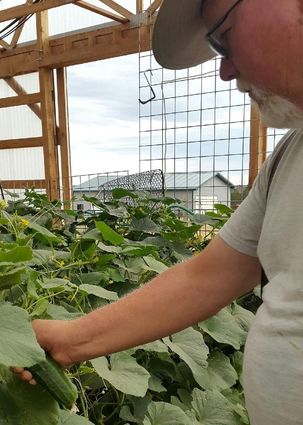 Okay. So it’s not quite fall yet. But the harvest appears to be pretty bountiful already. I’m not growing much variety this year, but I’ve already canned 93 quarts of dill pickles and the cucumbers are just getting started. They aren’t even close to their peak yet. I’m hoping for about 400 quarts. Then I won’t plant cucumbers for a few years. Hmm. Make that quite a few years. If they’re still coming in what do I do with all the bounty?

A few weeks ago I wrote about supporting your local farmers’ markets and that’s where a lot of the surplus goes. For a small gardener, once we take care of our families, then we have a surplus to sell. It’s a bit easier for the large-scale farmers. For the most part they are harvesting with equipment and don’t have to inspect every vegetable they put up for sale. Therein lies part of the draw for a local farmers’ market, the small local producers. We look at everything we dig or pick. If they’re not good, you won’t see them. Believe me, everybody has some produce that’s blemished, but not everybody is close enough to the end product to see the blemishes. We are. The questions now are, “what are we looking for?” and “how do you tell when a vegetable is ready to pick?” The answer, of course, depends on the vegetable. Let’s take a look at a few of the more common vegetables and fruits.

A lot of people grow tomatoes so let’s start there. The first thing I’ll do a give you a caution. The tomatoes you’ll find in the grocery store, and at the larger, commercial farmers’ markets, are going to be a beautiful red color. That’s not necessarily the appropriate indicator of a ripe tomato. Nowadays, tomatoes come in a variety of colors: red, yellow, orange, purple and black, to name a few. That doesn’t include green tomatoes that are unripe, but still great when they’re fried. Perhaps a bit greasy, but a delicious treat. The first thing is to look at the description of the variety of tomato you’ve decided to grow. That goes for every vegetable you grow, not just tomatoes. What does the literature tell you about ripeness and what indicators tell you when to pick. The first indicator, although not definitive, is the length of time it normally takes for the fruit to ripen. If the literature says 15 days from the time the fruit sets on the plant, that will give you an idea, but it won’t be exact. There are other factors, primarily temperature, that will also help determine ripeness. Most red tomatoes are a nice bright red when they are ready, but some will run more towards pink. You’ll have to use your judgement for other colors. You may pick a few before they’re ripe, but you’ll learn. Another indicator is the firmness of the fruit. A tomato should be firm, but not hard and certainly not squishy. A slicing tomato will be softer that a meat tomato. Slicers are normally used for sandwiches and cooked dishes. Meat tomatoes have less water and more flesh. They are mostly used for sauces and wedge salads. Cherry and grape tomatoes also come in a variety of colors. These are a bit easier to get used to, being small enough that you can pop one into your mouth and taste it. If it isn’t ripe it won’t hurt you. Just spit it out. If it tastes great, pick more because they’re ready.

Melons can be a bit tricky at the harvest and even trickier in the store. When picking from the garden, look first at the color and texture to make sure they match the melon you planted. Then look at the vine where it attaches to the fruit. When a melon is ready to pick, the vine will start to wither a few inches from the fruit so that it’s shutting off the nutrients to the fruit. The melon will continue to ripen and get sweeter, but it is essentially ready to pick when the vine has withered. It’s really easy to tell when the vine is no longer providing any nutrition. That doesn’t mean the melon has to be picked immediately, but don’t let it go too long. At this point, the continued ripening is deterioration and decay. In the beginning it will serve to make the fruit sweeter, but it can go too far. Many squash have most of the same indicators as melons.

Corn is another commonly grown vegetable. Corn can be self-pollinating, but does much better when there are at least five rows with ten or more plants in each row. The pollen comes down from the tassels to the silks. Since wind blows the pollen, it has a better chance of hitting the silks when there are more plants. Your literature will tell you what to expect from your variety. When it looks like it’s about to the right stage (the silks should still be pale green and soft) gently pull the husk back from the end of the cob and look at the kernels. They should be filled out almost to the end of the cob. A few immature kernels right at the end is normal. When you puncture a kernel you should get a spurt of milky liquid. It’s time to pick. Corn usually ripens all at once. If you have to leave it for more than a few days, it will start to dry, so don’t let it go too long. Corn will start losing its sweetness as soon as it’s picked. Eat it or process it right away. If you open the husk and find a caterpillar on the end, don’t worry about it. Just pick it off and cut off that end of the cob. A little bit of waste, but the rest of the cob is still good. By the way, corn is probably still a month or so out from harvest for most people.

Cucumbers are another popular vegetable. Here the variety and literature are invaluable. Pickling cukes will be smaller than slicing cukes. However, all cucumbers will continue to grow if they are left on the vine. If they get too big, they’ll get hollow inside and will taste more bitter than if they had been picked at the right time. Picklers are normally picked anywhere from 2 inches to six inches long depending on the variety. With that thought in mind though, I’ve left picklers on the vine until they were nearly ten inches long and they were still good. About five years ago I found one at the end of the harvest that was very old and nearly two feet long and about six inches in diameter. It wasn’t by choice, but rather that I didn’t see it until I was tearing out the vines. It was tolerable to the taste but hollow. Slicing cukes come in a variety of sizes and colors so be sure to check your literature.

As soon as you pick any vegetable or fruit, cool it as soon as possible to slow the decay process. You can start with chilled water. Some can be immersed in water and some are better sprayed. The point is that you need to chill them immediately. Then, except for tomatoes, put them into cold storage. Tomatoes will actually store quite well on the counter for several days after their initial cooling. Before you use any vegetable, regardless of the source, always wash it thoroughly. I even wash my hydroponic vegetables that haven’t been in contact with soil. It’s just a good practice. There’s dust in the air and insects. Since we don’t know where the dust comes from or where the insects have been, just take the precaution and wash everything. If you have any questions, ask a Master Gardener. It’s what we do.