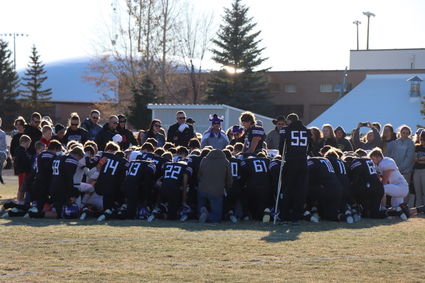 The Burns Broncs finished the season with a 56/12 loss to the Mountain View Buffaloes this last week and while their hopes for the state 2A championship are over, the boys played one of the most amazing seasons in many years. Coach Brad Morrison couldn't be more proud of his team, championship or not. "Though we fell one game short of our goal, this season has been a historic one for the Burns Broncs. We scored 34 points per game, which is the second best all time for a Burns Broncs team." Coach Morrison said.

No one can deny that these boys played to win all season. The fact that they came up against Mountain View is a testament to how well they played. "Mountain View had only given up 24 points the entire season, and only one touchdown was scored against their varsity. We scored twice against their varsity." Coach Morrison stated. The Broncs knew that they had a challenge in front of them, but they still played as hard as they could.

Senior Boe Clayson (34) ran for over 100 yards this game, and was the first player to do so this entire season against the Buffaloes. No matter how fast the boys ran, or how hard they tackled they just couldn't get by the Buffaloes this time. "We knew that we would have to play a perfect game to compete with them, and we weren't able to hang with them in the 2nd half. Without a doubt, they are the best team I have coached against since I started coaching in 2011." Said Coach Morrison 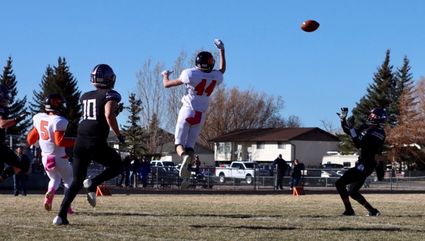 Broncs Tanner Wilson leaps high in an effort to catch the ball.

The Burns Broncs can hold their heads up though, as they made some pretty exciting advances this season. In the history of Burns football they have only gone to the playoffs twelve times, and in that history they have only won seven playoff games. In this season, the Broncs were able to do both of those things. "We are very proud of the efforts of the players and community." Said Coach Morrison.

This may have been the last game for the senior boys, but even without a championship there's no denying the heart with which they played. There's no sadness in the loss. "Mountain View and Buffalo have been on a collision course since the end of the season, and the State Title game in 2A will definitely feature the two most worthy teams." Said Coach Morrison, only pride in what the boys were able to accomplish this year.