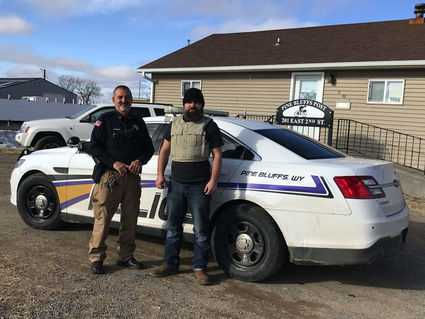 Above: Pine Bluffs Police officer Rodney Kemp stands with his son, Marine Veteran Jeremy Kemp during a ride along.

Jeremy Kemp was born in July, 1983. He grew up in Alma, Michigan where he would spend his youth. Kemp is the son of Rodney and Corrie Kemp of Pine Bluffs.

J. Kemp graduated from Alma High School, in Alma, Michigan in 2001, not sure of what he wanted to do.

Then it happened. 9-11-2001. He took the initative at this point, with pride and love of his country and joined the United States Marines.

The Marines would take him far from his home in Michigan to Camp Pendleton, California for boot camp. Kemp would learn to adapt not only to a climate and culture change, but he would learn the milit...