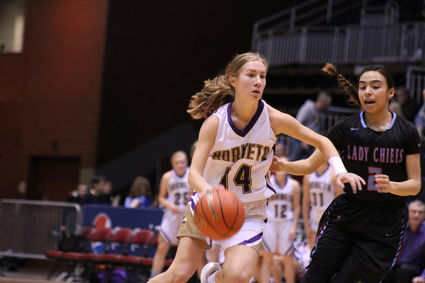 Above : Jaden Shelit driving to the basket against Wyoming Indian in the Championship match.

As our Pine Bluffs Hornet basketball teams went to Casper for state basketball on Thursday, the girls had won their first game against the Kemmerer Rangers (57-30) and later on that day the boys had played and lost their first game against Wyoming Indian (72-68), as it was such a close game for them. On Friday the boys had to play the Kemmerer Rangers and won that game (70-59) and later that day the girls had played Lusk and won that game (63-27) it was a good day for both teams. On Saturday, the boys played Rocky Mountain had lost (67-64), it was such a close game and they all played their...