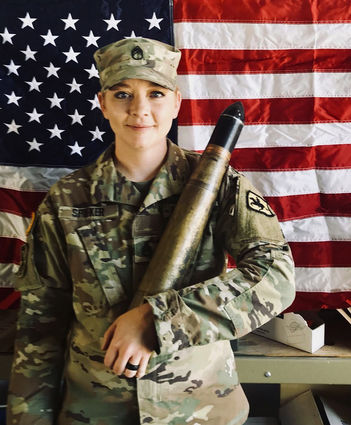 CHEYENNE, Wyo.- You can tell that Sgt. 1st Class Sarah Spieker loves her job. The smile on her face when she talks about her life in the military and working as an intelligence analyst for the counterdrug program is unmistakable. She's assigned to the Division of Criminal Investigation (DCI) south enforcement team. The job of an intelligence analyst is to assist law enforcement partners with investigations involving drugs, and if it ever arrives, terroristic activities.

Spieker was born in South Dakota and moved to Wyoming when she was in middle school. Her family owns a ranch and she attributes working on the ranch as being the reason she was able to transition to the military so easily.

"Growing up on a ranch," she explains, "I give it full credit for my work ethic. Above all else."

Spieker always considered joining the military, and wanted to join the Air Force, but her dad wanted her to try college and get a degree first. She enrolled at Casper College, and began earning her degree towards teaching high school history.

It was when she was sitting in college, after having changed her major a couple of times, that a friend of hers started talking military with her. An acquaintance had just become a recruiter for the Army Guard, so when her friend asked to join with her, she said, "Heck yeah." Spieker enlisted as an 89B, or Ammunition Specialist, and 45 days later she was off to Fort Jackson for basic training.

"It was a good experience," she says, "and I'll never forget the gas chamber."

After returning from basic training, Spieker began her career managing ammunition for her unit out of Guernsey. Shortly after she volunteered to deploy with the 133rd engineering company to Bahrain, and worked security forces as a team leader. Herself and one other female non-commissioned officer were promoted while there. The deployment lasted 9 months.

"It was a great experience and I'm super glad I did it."

After her deployment, Spieker transferred to Sheridan, where she saw a job opening for counterdrug and decided to apply for it. She worked with the northeastern team for 2 years, and after transferring to Cheyenne, is now with the southern team. 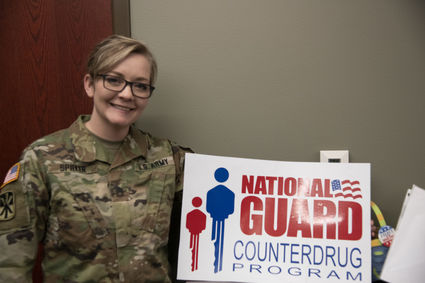 Recently, she's been busy assisting law enforcement in a historic case for Wyoming. In January, a California man was convicted of possession with intent to distribute controlled substances. Last May, a highway patrol officer pulled the man over in Laramie County, and ended up finding nearly 60 pounds of drugs that consisted of methamphetamine, heroin, cocaine and the synthetic opioid fentanyl. It was her work assisting with digital forensics that led to a guilty verdict.

She says she can't imagine doing anything else.

"Being able to work in our community in a National Guard capacity, helping law enforcement," She goes on to say, "I love it. I love the guard. I love all of the opportunities I've been given through the guard. More importantly, working in counterdrug is something I never imagined I would do."