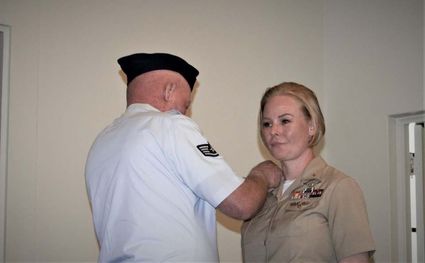 Above: Retired U.S. Air Force SSgt. Charles (Chuck) Radcliffe pins the new rank of Ensign on his daughter, Nina Radcliffe in San Diego, California. The Radcliffes (Chuck and Jo) traveled out for the pinning ceremony and Radcliffe was given the honor of pinning the new rank on his daughter and he shaved off his beard and prepared to look as he did upon retiring.

You watch him come down the hall, his uniform all intact, neat and sharp. He pats you on the head or gives you a playful swat on the backside, before he heads over to mom, to say goodbye.

Sometimes, his good-byes are just for the day and he will be back at the end of his shift, or they are for months at a time because he has gone TDY overseas.

Yes, we are the daughters of a soldier, a military man, whether it be Army, Navy, Marines, Air Force or Coast Guard and Reserves. We know the drill...Dad is going to be gone, help your mother, and don't get in trouble! Those were words that still to...