Full slate of activities on tap for the Fourth of July 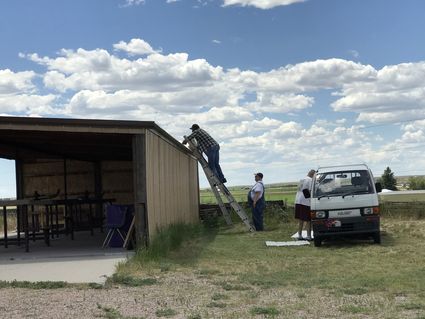 Above: Charles Cunningham (ladder) works with Den Dudrey and John Wise to repair the roof in preparation for the July 4th festivities and open to the public shoot.

A full day of traditional Fourth of July activities is on tap for residents looking for ways to celebrate Independence Day on Saturday, from a barbecue to a fireworks show.

The day will start with a potluck barbecue and open shoot at the Pine Bluffs Sportsman's Club at noon and wrap up with a fireworks show at Pine Bluffs Ballpark.

The potluck at the Sportsman's Club will begin once the club's annual meeting ends at about 12:15 p.m., said club President Charles Cunningham.

"I put on a nice little barbecue, a beef brisket, and people, depending on where their last name falls in the alphabet,...