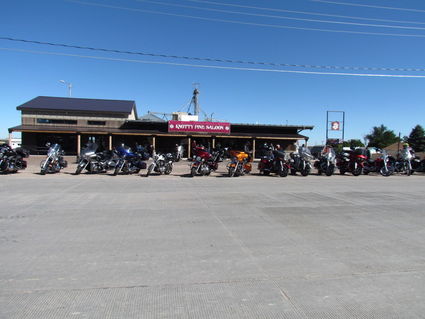 Top: Members of the Red Knights out of Kimball line the parking lot of the Knotty Pine Saloon.

The Red Knights Motorcycle Club Nebraska Chapter 4, a club composed of fire service members and their families, held its 7th annual poker run on Saturday, Sept. 12th to raise money for local victims of fire and honor those lost on 9/11.

"Half of the money we raise stays with the club and goes to our donation fund and the other half gets split up and pays out to the highest poker hand, but all that usually goes back to a good cause," said Mark Whetham, chapter president. "We're just here for the ride, no one's here to win."

"We hold our poker run as close to 9/11 as we can to pay tribute to the 343 firemen and women we lost," said Whetham, who has been the chapter four president for seven years.

Chapter four, one of five chapters in Nebraska, was started nine years ago and currently has 34 members.

"When we started this, we asked what charity do we want to be a part of. We talked about Red Cross and others, but our money wouldn't stay local, someone has a disaster in our hometown, they wouldn't see that money. Every community that we have a member in is supported by this." 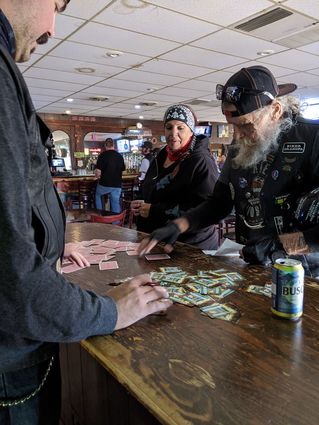 Above right: Amy Sapp waiting for cards from Wacey Schmid.

"If someone loses their home to a fire in one of our communities, we're going to know, we're all firemen," said Whetham. "We make our donations straight to them."

Riders registered at Beer and Loathing in Kimball, Neb. From there, the first stop on the list was Knotty Pine Saloon in Pine Bluffs, Wyo. Riders drew a card, recorded it, and continued to the various stops in Nebraska and Wyoming, ending at the Sagebrush Lounge back in Kimball where the winner was revealed.

"We usually go to Colorado with our run but do to COVID we changed it up," said Whetham.

The Red Knights Motorcycle Club was founded in 1982 and is an International organization with 300 chapters and 9,000 members throughout the world.

Recently, record setting wildfires have torn across the west and a local emergency was declared in Banner County, Neb. after 4,000 acres went up in flames on August 28.