'Ain't from Here' appears at the Knotty Pine Saloon 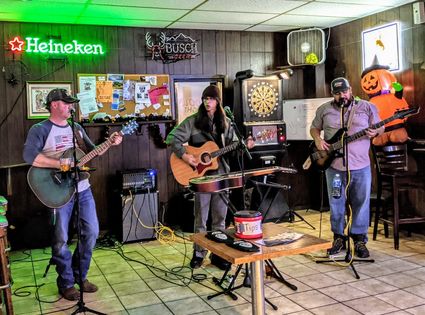 Above: Jeremy Smith, Braydon Peterson, and Chris Solis of 'Ain't From Here'.

The Knotty Pine Saloon hosted on Friday evening, the band "Ain't From Here". The three man band from Fort Collins, Colorado, has played larger venues with a full band.

The three performers, Braydon Peterson on lead guitar and dobro (resonator guitar), Jeremy Smith on rhythm guitar and Chris Solis on base guitar met at an Open Mic Night in Fort Collins. All three are song writers.

Their music is referred to as Red Dirty Music, which is a fusion of heavy metal with rock, blues and folk. To the audience it was reminiscent of Bluegrass.

The band has one album that's been released and they ar...