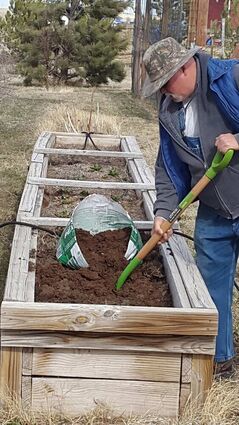 Above: Mike Heath preparing soil in a raised bed.

When I was in Saudi Arabia and other countries on the Arabian Peninsula I saw a lot of sand. Everywhere I looked was sand. Well...sand or concrete. Very little concrete. It was the most desolate region I've ever seen. I couldn't believe anything could grow there. Yet there were plants growing. In fact the Saudis had an ingenious cooling system for the walkways. Vining plants were growing directly in the sand with a slow drip system at each plant. The vines covered a trellis system, hanging down the sides, to create a tunnel. As the air flowed through the vines it cooled off the tunnel to a very tolerable temperature. Putting that into perspective, though, when the ambient temperature is well over 100 degrees it doesn't take a lot to feel cool. But what I found curious is that the plants were planted directly into the sand. There didn't seem to be any soil at all. At least what I recognized as soil. How could the sand hold the nutrients required to sustain the vines? But I had other things on my mind so those questions went unanswered.

Obviously, the plants were suited for the region and were able to survive in whatever the sand held. It's pretty much the same anywhere in the world. Plants prefer a certain soil, certain temperatures, a certain humidity levels. Then let's not forget the nutrients. For any plant to survive the nutrients must be present and in the proper proportions for the plant. That's where the soil comes in. Although the soil in Saudi Arabia was sand, it held the appropriate nutrient mix for the plants that were growing. Of course, we have an entirely different soil here.

There are several types of soil and they embody a variety of properties. In Laramie County, our soil is primarily sandy loam. Soil descriptions are based mainly on the particle size of the materials in the soil and the amount of organic matter present. You can probably guess that we're a bit light in organic matter. Sand is the larger particle size while clay is very small. In most soils the two are mixed in varying proportions. Sand allows water to flow quickly for fast drainage. Clay, on the other hand, traps water and drainage is slow. Drainage is good, but draining too fast will increase the amount of water you'll be putting on your plants.

The large pores around the sand particles are why the water drains so well. Unfortunately, as the water drains it takes the nutrients with it, increasing both the water and fertilizer requirements. Clay has a much finer particle and aligns pretty much as layers if you were to look at it under a microscope. Think if it as randomly stacking plates. As you pour water on the randomly stacked plates the water has to run back and forth around the edges before draining out the bottom. At the same time, there will be water that stays on the plates and doesn't drain. Contrast that with sand and envision it as a pile of rocks. As you pour water on the rocks it immediately flows through to the bottom. You can see how water moves faster with sand and doesn't hold nutrients well. The plates in the clay hold both water and nutrients longer. However, there are drawbacks to pure clay. Drainage is the first problem. Most plants like moisture in the soil but they don't like to be waterlogged. If they did they would grow in a lake or pond. The other issue is that when clay dries out it becomes extremely hard. Think of adobe. Adobe is simply dried clay and has been used as a building material for thousands of years. Plants just won't grow in it. That means we need a mixture of sand and clay.

Along with the sand and clay, many other ingredients are necessary for good soil. Let's set up an example of a soil with too much clay. The first thought would be to add sand to help it drain. Logical, but not correct. The actual amendment needed is organic matter, such as compost. Organic matter not only lightens the soil so the roots can move more freely but it also adds nutrients that your plants need to grow. It won't add everything, but it is necessary. As the organic matter breaks down it releases those nutrients into the soil. Another benefit of organic matter is that it feeds the microbes in the soil that turn the nutrients into a form that plants can absorb. We could add nutrients, but if they're in the wrong form, the plants can't use them. Iron is a good example, but that's another article.

Before adding amendments to your soil, it helps to get a soil analysis. I use the labs at Colorado State University. They will send you an analysis that will give your soil type and what you need to add to make it suitable for the plants you intend to grow. For the most part, the levels of the micronutrients in our soil is adequate. What you will need to pay attention to is replenishing the organic matter each year. There are several ways to do that. Compost is the obvious method and the one we hear so much about. Compost is nothing more than organic materials, such as grass clippings, leaves, kitchen waste, etc. that has been allowed to decompose into what actually looks like soil. I use a wide variety of materials in my compost, including all of the waste vegetable products from the kitchen, including coffee grounds with the filter. The filters will decompose and you'll never see them in compost. Each year I add one to two inches of compost to my garden. That maintains level organic matter in the soil at a pretty even amount. Another method of adding organic matter is to use organic mulch. Organic mulch is nothing more than grass clippings, straw, leaves or some other material that is put around your plants to help keep the weeds down and cool the roots. Just till it in or turn it under at the end of the season so it can rot. The third method isn't for small areas. It is to grow a cover crop, such as rye or buckwheat, and turn it under at the end of the season.

Whatever method you use, the idea is to build your soil and protect it from year to year. Our soil isn't the greatest for growing most vegetables and flowers but with a little bit of tender loving care we can make it so. Soil tests, mulch, fertilize as necessary, and don't overtill and your soil will grow plentiful crops and an abundance of flowers season after season. If you have any questions, ask a Master Gardener. It's what we do.