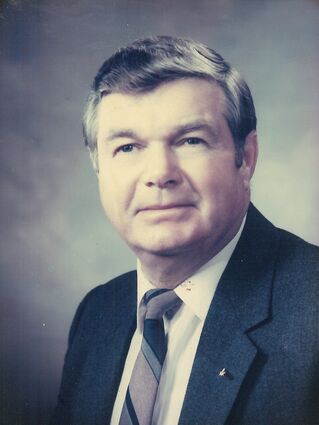 Don was born on February 21, 1935 in Kimball, Nebraska to Jay B. Brown and Iwana "Dot" Brown. He served in the United States Army from 1954 to 1956 and was stationed in Germany during the Korean War. After his military service, Don returned to Wyoming and began farming with his father. During that time, he attained his Agriculture Business degree at the University of Wyoming and met Ellen. One year later, they were married in Fort Collins and spent 56 years together.

Don was a farmer through and through, and he was active in his community for many years. He was a member of the Jaycees , the Lions Club, the Masonic lodge, the LCCC Board of Trustees, the Wyoming State Parole Board, the CFD Indian Committee, the CFD HEELS and the National Potato Board. He was a proud life-long Republican.

He is survived by his wife, Ellen; two sons, David (Mindy) and Alan (Gina); his sister, Virginia; and his grandchildren, Nathan, Matthew, Kaitlyn, Fisher and Carson.

He was preceded in death by his parents; an infant brother; and his brother-in-law, Richard "Dick" Stephens.

In leu of flowers, donations may be made to the Black Dog Rescue and/or the Cheyenne Animal Shelter.

Our lives and the world of farming will never be the same.