Weekend of Wins for Pine/Burns Wrestling 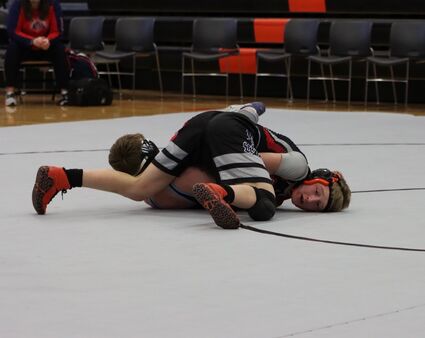 Above left: Colby Smith gets the pin at 126 against Rylan Ward from East JV.

Burns/Pine Bluffs Wrestling team had a busy but fruitful weekend. They competed in 3 matches against Newcastle/Upton, H.E.M. and Saratoga. They won all three matches. They beat the New Castle/Upton wrestling team by a score of 39 to 33. It was a close match but the Burns/PB team finished strong. Performances by Elliot Anderson (160lbs) and Colby Smith (126lbs) who won by pin fall. Elliot pinned his opponent in 23 seconds. Colby also won by pin fall in 1:40 seconds. Colter Haws also won his match by pin fall in 1:31 seconds. Other winners in the New Castle/Upton match were Cody Winslow (182l...