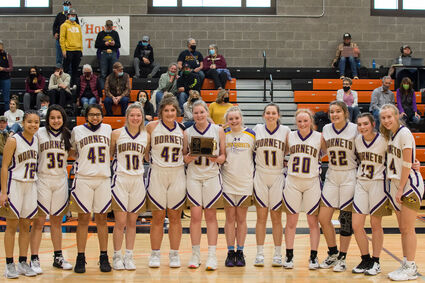 Above: Lady Hornets with their consolation trophy.

In the second game of the state tournament the Lady Hornets wanted revenge and a chance to move on in the tournament. The next team they would face would be the Shoshoni Lady Wranglers. The Wranglers lost to Sundance earlier in the day and they wanted another chance to more forward in the tournament. But the Hornets proved to be too much for the Wranglers and the Hornets won a close one 53-51. It was an up and down game with both teams going full force at the boards.

The first quarter would be the Hornets as they put up 18 point. The defense was also on point as they held the Wranglers to...