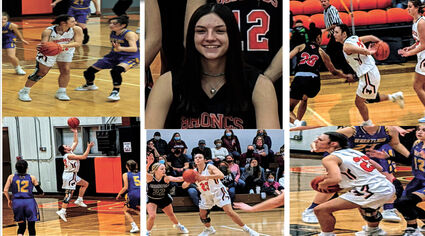 Burns has an All-State and All-Conference award winner. And it happens to be the same person. The Wyoming Coaches Association All Conference selected Rylee Jo Ward as one of the honorees. And the Wyoming Coaches Association All-State Conference also selected Ms. Ward as one of their Honorees. She is one of the outstanding players on the Burns Lady Broncs Girls Varsity Basketball Team. She was named a couple of weeks ago but the information was slow to reach the reporter.

When you look at Wards stats it is no surprise that she was selected for these honors. Ward had the second highest single game points scored in the region. On 5 January against Alliance she scored 35 points. In that same game against Alliance she had the third highest number of steals in a single game in the region with nine. She also had the first and second number of field goal attempts with 28 and 24 respectively. She also had the second most three-point attempts with 14 and the third most free throw attempts in a single game with 16.

During the season Ward averaged 16.1 points per game whic

h was third in the East region. She also was averaging 3.3 assists per game and was the number one in steals per game with 4.1.

Of the 19 games the Lady Broncs played Ward was the leading scorer in 13 of them. She also led the team in rebounds in 4 of those games and she led the team in assists in 12 of the games showing that she was an all around team player.

Amazing stats and a credit to her coach and team. All-Conference and All-State Honors to Rylee Jo Ward.

"Rylee had a nice year for the Broncs. She finished third in 3A in scoring and the top five for both assist and steals. After having last season cut short due to acl surgery to come back and be an All State Selection is a big honor for her and our team." stated Coach Barry Ward

"I would just like to thank my teammates for putting me in a position to be honored as an All State player." said Rylie Jo Ward.