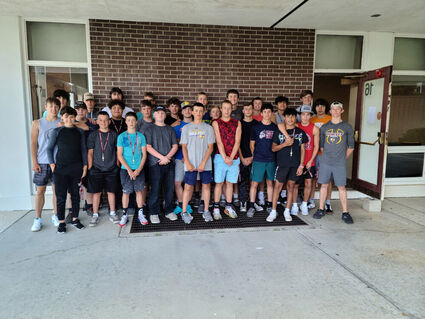 The Pine Bluffs Hornets varsity and junior varsity football teams attended a football camp over the past two weeks. This is a time for the young athletes to learn, practice and watch other teams as they all get set for the 2021 season.

According to coach Will Gray "Camp went really well". The Hornets took 29 players to the camp and everyone seemed pleased with the outcome. Coach Gray said "We took 29 players so we were able to split into varsity and junior varsity groups. This allowed the kids to get plenty of practice and scrimmage reps. The kids handled four days of heat and football very well." Part of the camp is to run scrimmages, kind of a play by play game. They will run a play and then make changes and do other things against a team that is doing the same.

Coach Gray also said, "We were able to play some very good teams." This kind of camp helps the coaches to see just where they need to work and what needs improving. Coach Gray stated "We have a lot of work to do but we are pleased with the progress we made over the last two weeks. Now the biggest step will be having great attendance in the weight room over the next 11 weeks". Looking forward to an exciting season of Hornets football.