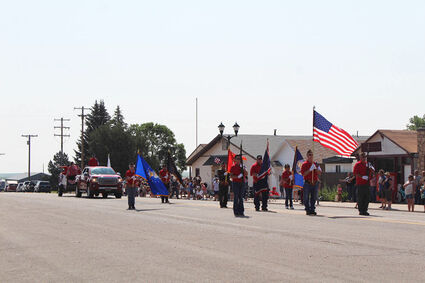 Above: Members of the Donald Eisenhauer American Legion Post 60 stand present arms for the National Anthem during the Albin Day parade.

Honoring our military veterans is done in many ways, and shown in many different forms. Flags, ribbons, patches and stickers display a form of thank you, pride in and a legion to our veterans. Yet the strongest and most enduring is that of the Honor Guard.

The first known Honor Guard was in 1925, according to Merriam-Webster.com. After World War I, with services, parades and other events, members of the American Legion, and other organizations connected to the military began their show of colors (the American flag, and all military flags.) during parades, sports events, and funeral services...