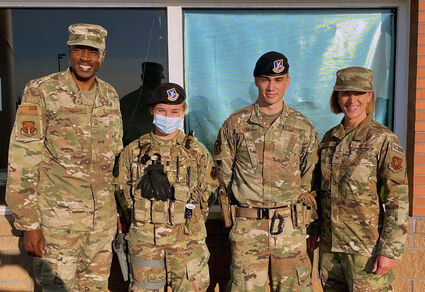 Above: Chief Master Sgt. Nicholas Taylor, 90th Missile Wing command chief, Airman Suzanne Pedro, Airman 1st Class Frank Shaw, both from 90th Security Forces Squadron, and Col. Catherine Barrington, 90 MW commander, pose for a photo on F.E. Warren Air Force Base, Wyoming, July 7, 2021. The Airmen were coined by wing leadership in recognition of excellence while performing their duties. Their actions in defending the base directly contributed to the capture of an individual with active arrest warrants and the recovery of a missing child.

F.E. WARREN AIR FORCE BASE, Wyo. -- Airman Suzanne Pedro, an Installation Entry Controller from the 90th Security Forces Squadron, was recently recognized by wing leadership for actions which led to the capture of an individual with active warrants and a missing child here June 28, 2021.

A man drove up to the base gate and handed Amn. Pedro, who was assigned to defend that gate, an unusual form of identification. When the man and child in the vehicle refused to make eye contact, the Airman began to suspect something was amiss.

"I had a feeling something wasn't right," said Pedro. "Neither...