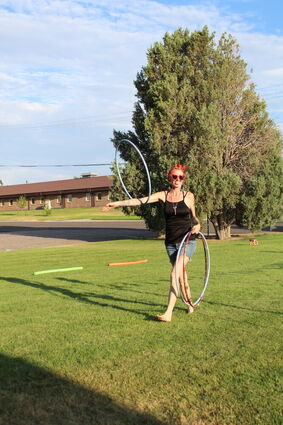 The Olympics have come to Girlz Night at the Crossroads Community Church in Pine Bluffs on July 21st. The torch was lit by Pastor Dan Debruyn.

Three teams of girls were in these Olympics. The White team, the Red team, and the Blue team with their coaches helping through all of the events. Of course, there was a referee and judges to be fair overall.

The first event was the Marshmallow Launch. Each member of the team took turns spitting marshmallows across the line. Whoever spit the farthest won the event. The win went to the White team. Way to go White team!

The second event was the Toe D...