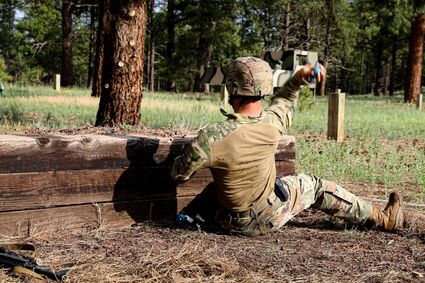 FLAGSTAFF, Ariz. - On July 18, Spc. Aiden Carroll, a Horizontal Construction Engineer with the 133rd Engineering Company in Laramie, made the journey from the rocky plains of Wyoming to the beautiful mountains of Flagstaff, Arizona. His mission? To compete in and win the 2021 Army National Guard National Best Warrior Competition held July 19-23.

Carroll already had two victories under his belt. He placed first in the Wyoming state competition in April, and again in the Region Six competition in Oregon at the beginning of June. From those previous wins, he knew this competition was going to be tough. But he was determined to put in all his effort, representing his home state to the best of his abilities.

Even with the prior experience, the national competition was as tough as ever. Over five days in Arizona, Carroll and 13 other competitors participated in a multitude of tasks that pushed them to their limits, both physically and mentally.

"It was quite a bit harder, with long days and not much rest." Carroll said, "We spent a lot of time preparing for the next day late at night."

There were over 20 events, each with its own set of challenges. The Soldiers competed in everything from a three-gun challenge to testing their abilities in combat water survival.

For Carroll, the worst event was the never-ending ruck march. It was one of the final events held on the fourth day of the competition.

"We were on the ruck and thought it was going to be short, so I was moving at a good pace," Carroll said. "By the time we got back to base, we had someone on the side of the road give us some advice to pace ourselves.

My legs were killing me. It sucked, but we made it through."

He noted that the way he pushed through is just remembering to embrace the suck.

But, even with the events pushing them past their limits, the soldiers attending still managed to enjoy themselves.

The competitors made fast friends with one another, Carroll said. They helped each other through the many struggles during the events.

Not only did the Soldiers participate in new and exciting events and make some friends along the way, but they were also able to represent their states to the best of their abilities. They showed others what their state is capable of.

"He put 100 percent effort into everything he did," said 1st Sgt. Glenn Worley, the 1st Sgt. for the 133rd Engineering Company, when talking about Carroll. "He's the perfect face for the enlisted Soldiers of the Wyoming Guard."

Now, in the end, this is a competition and a winner must be named.

After the five days of brutal competition were over, and the Soldiers had exhausted themselves in all aspects, they sat together at the banquet, waiting to discover who would be named Soldier of the Year and Noncommissioned Officer of the Year, respectively.

The Soldier and NCO who distinguished themselves from the elite pack of guardsmen at the competition were Sgt. William Lukens, a Tactical Power Generator Mechanic with the 208th Area Medical Support Company out of Tennessee and Staff Sgt. Zachery Carlson, a Special Forces Engineer with Bravo Company, 1st Battalion, 19th Special Forces Group out of Utah.

The winners will move on to compete in the Department of the Army Best Warrior Competition, where they will go head to head with the winners of the Army Reserve and Active Duty Army competitors who won their respective competitions.

As for Carroll, he's looking forward to his chance at competing again as an NCO.

"I plan to take a few years off from this competition," he said. "Hopefully, I can help other Soldiers who want to compete, then take another run at it myself once I'm an NCO." By: Cpl. Mikailla Brownfield, 197th Public Affairs Detachment