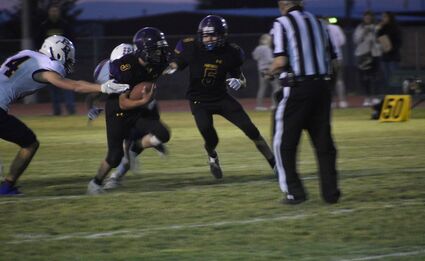 Above left: Panthers No. 3 carries the ball, with protection from No. 5, as Hornets No. 34 Travis Lerwick attempts to pull him down.

The Pine Bluffs Hornets Varsity football team traveled to Saratoga to take on the Panthers in their third game of the season. If the Hornets are able to keep their play up they will be in line for the state championship game. They have already knocked off the number one team, Lusk and now they have beaten the fifth ranked team the Saratoga. The Hornets beat the Panthers 55-0. A sound victory and well coached and played game.

Quarterback Stu Lerwick (#12) lead the team with a solid performance. Lerwick threw 14 of 19 for 205 yards. He threw for 3 touchdowns and only had one interception. On...