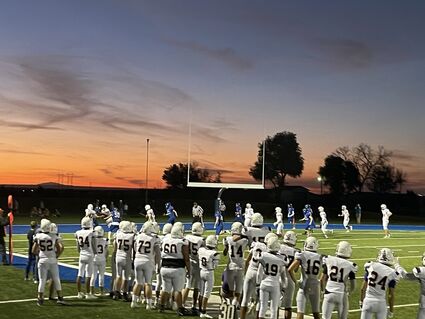 Above: Hornets' team watches as No. 12 Stu Lerwick scores a touchdown.

On Friday the number two ranked Pine Bluffs Hornets football team traveled to South East High School to do battle with the Southeast football team. The Southeast team is unranked but still a powerful adversary. The Hornets were well aware of this and were well coached and dispatched the Southeast team with authority. The final score of 52-19 demonstrated why the Hornets are ranked number two. The Hornets rushed for a total of 187 yards and 4 touchdowns and passed for 187 yards and 2 touchdowns.

Quarterback Stu Lerwick #12 is proving to be a force to be reckoned with. Completing 14/22 passe...