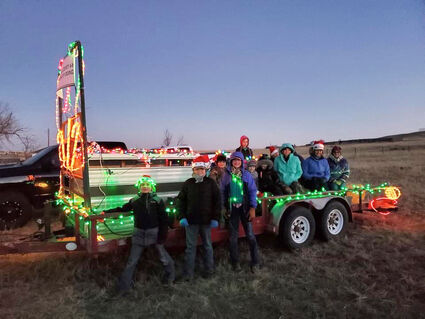 Above: Members of the Laramie County 4-H - Hillsdale with their Christmas float.

Santa paid a visit to Hillsdale Wyoming on Saturday December 18th. The cars were lining the streets to get the perfect spot to see the parade. A small fire truck started the parade and all the floats were full of people wishing everyone a Merry Christmas. Four of the floats had lights a twinkling making the day merry and bright. Then came the big engine fire truck of Laramie County Fire district six carrying none other than the big man himself, Ol' Saint Nick, Kris Kringle, Santa Claus! The parade started at the fire station and went down Main heading west then it looped around by the Hillsdale United Methodist Church back to the fire station. It may have been small, and the weather outside was frightful but the warmth of the hearts and spirit was in the air. After enjoying the parade everyone congregated at the Hillsdale United Methodist Church for a soup supper and some time for the kids to sit on Santa Claus' lap. The community had a wonderful time celebrating the season. 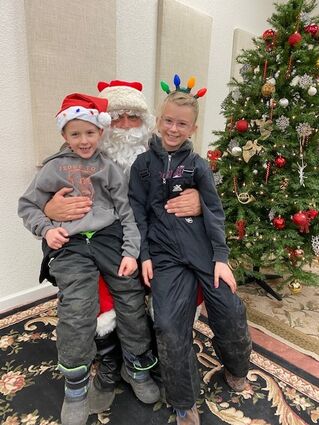 Below: Sitting on Santa's lap are Sage and Teigen Derner