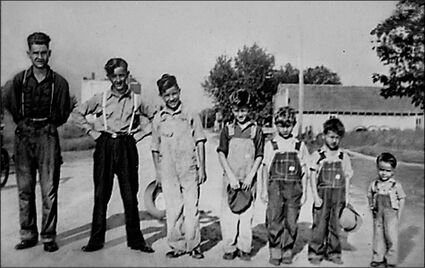 The seven Eisenhauer Marines in Wallace Neb. on moving day in 1942. They are about to leave for Pine Bluffs, Wyo. From left to right are Don, Delbert, Bob, Lloyd, Tom, Howard and a long time nobody, Little Poot.

Families often carry on old traditions or begin their own new ones. The family of Harry and Truly Eisenhauer joined the ranks of the latter when all seven of their sons served in the U.S. Marine Corps over two decades. Between 1942 and 1962, their sons, Don, Delbert, Bob, LLoyd, Tom, Howard and Loren, served their individual enlistments as Marines.

The Eisenhauer boys were born in Wallace, Neb., and moved to Pine Bluffs during the summer of 1942, where their father had a new job as a mechanic, and their mother was kept busy caring for her family.