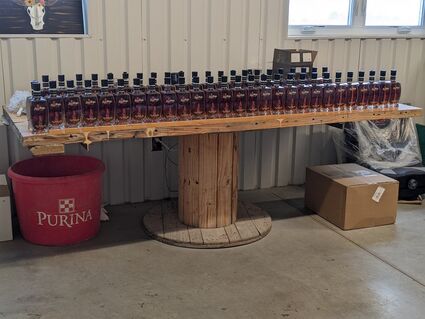 Above: First new whiskey of 2022 released at Pine Bluffs Distilling.

On Friday January 7, 2022 Pine Bluffs Distilling released their 100 % Straight Rye malt Whiskey at 12 p.m. This is the second year to release the same whiskey but it has been aged for a year. Chad Brown started it last year. Customers waited to get the first fifty bottles. At that time the customer put their name on the number of the bottle to get one every year for twelve years.

Last year, people were waiting in line at 6 a.m. just to be the first one to get a bottle.

This year since people already had their names on the bottles there was no rush for the product. It was "in the bag" so to...