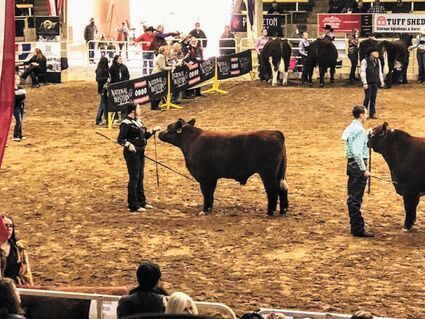 Above: Yazmin Munoz shows her calf which had previous been injured with a broken leg.

Local youth, Yazmin Munoz brings back her injured steer to show at the National Western Stock Show in Denver.

Catch-A-Calf is a program that has happened since 1935. Every year youth that have been in 4-H and Future Farmers of America apply in four states which are Colorado, Kansas, Nebraska, and Wyoming. These youth fill out the papers and obtain sponsors to have the opportunity to raise a calf to show at the National Western Stock Show. The youth have a year to prove they have the skills and ability to do the program. At the end the record books are turned in to be judged and the time to show the calf off in front of spectators. Throughout this time the student is interviewed, plus the calf is judged on production and carcass quality. The Grand Champion and Reserve Grand Champion are the only ones that go to sale on the last day of the National Western Stock Show. A percentage of the sale goes back in the to the Catch-A Calf program, and a percentage goes to the winner and to others that participated with the student.

Yazmin Munoz from Egbert, Wyoming applied for the Catch-A-Calf program last year in 2020. Because of Covid the program was altered for the year. Forty students had received a calf on May 7th, 2021. She was excited to start work on the calf. Munoz worked on halter breaking and walking the calf around. The calf had learned to be washed and dried. July 10th was a sad day for Munoz as the calf broke his leg. Now it was waiting for the calf to heal. Throughout this time the calf lost weight. After two months, Munoz had to start all over again. Leading the calf around along with washing and drying him. In process adding a little weight on him that wouldn't be too much for his system. Munoz had to keep calm and get to know her calf throughout the program. Munoz explained that she had to write progress reports every month to the sponsors. She kept a record book for all her rations and the health of the animal. Munoz learned to keep track of all the spending on the animal. She said, "I had a great experience and am excited to use the skills in the future." Munoz showed in the showmanship portion of the program, it was a little disappointing as her steer tried to lay down in the middle of the show. At the end of her hard work of record books and raising the steer she got ninth place out of forty students that participated. She was excited after having a hurt steer. Munoz is looking forward to show this year again.