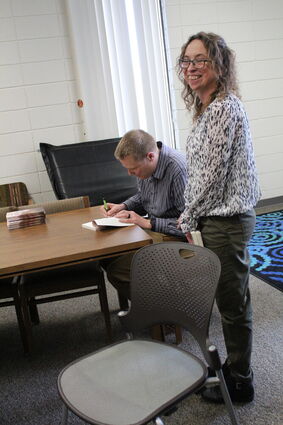 Above: Author Dean Petersen signs a copy of his book for Holly Bauer.

Murder, mystery and post-traumatic stress disorder are all part of this book. The author Dean Petersen was at the Pine Bluffs library on January 29th introducing his book, The Burqa Cave.

Petersen is a family man who has a Bachelor of Arts degree in Film Studies. Petersen joined the United States Army in 2011 where he was stationed in Germany. He lived in Mountain View, Wyoming with his parents when he was young and now he lives in Cheyenne, Wyoming. He has been writing for years but nothing has been published until now. The Burqa Cave is his first book.

The Burqa Cave ideas come from learning from other people's experiences. Petersen has been around soldiers and friends that have post-traumatic stress disorder, (PTSD). As for the scares and supernatural fiction parts in the book, they have been his thrill for a long time. About the gun range in the book, Petersen has been to one at Mountain View. He thinks there is an eerie feeling on the range with the shadows and the echos in the area. The murders are similar of ones that happen in the area.

The teacher in the book was in Iraq. He was trying to get over issues from the past. His student in the book finds the victims of the murders.

Peterson likes the fear factors and spookiness of the life. The unknown has his curiosity of the world piqued. In this book there was a twist to help the reader figure out the solution. The ladies that were at the event on Saturday were thrilled with the book. Peterson has another book coming out soon called "Next Black Cloak in the basement of the Welterschied."