An Airman's journey to becoming a U.S. citizen 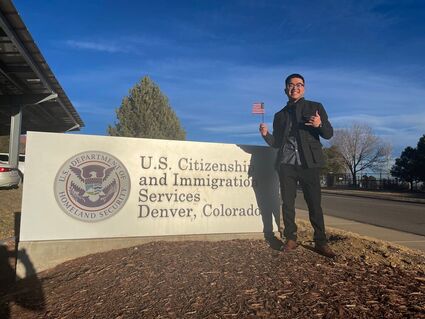 Senior Airman Miguel Perez, 90th Force Support Squadron fitness specialist, stands outside the U.S. Citizenship and Immigration Services in Denver, Colorado on December 20, 2021. Perez gained his U.S. citizenship after moving to the U.S. as a child and joining the U.S. Air Force.

F.E. WARREN AIR FORCE BASE, Wyo. -- There is not one single American dream. There are over 300 million that belong to each unique person living in the United States of America. Miguel Perez's American dream was to become a U.S. citizen.

In 2003, four-year-old Perez and his family moved 10,600 miles across the world from the Philippines to the U.S. for a fresh start. Upon arrival, his family decided to plant their roots in San Diego. Perez has lived in San Diego ever since, and it's where he went to school, got his first job and made many friends.

"San Diego has always been and will always...