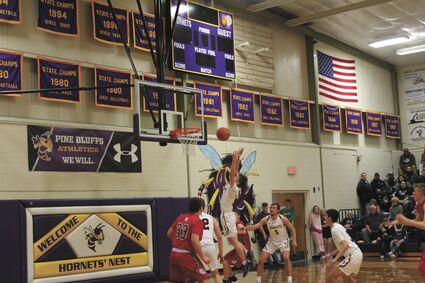 Above: Pine Bluffs Hornets No. 10 Ryan Fornstrom going for the shot.

The Hornets started their road to the state championship game today against the Sundance Bulldogs. In a very fast paced and defensive game the Hornets did battle with the Sundance Bulldogs in the first round of the 2A regional playoffs. It was a defensive first quarter with neither team scoring until the latter part of the quarter. Reed Thompson was the first to score with a slam dunk for two points. Stu Lerwick, the player that set the new record for points scored in a game and the "Wyoming News player of the week" was held to only 20 points. The Hornets did have other weapons at their d...