Burns Broncs play their hearts out at Regionals 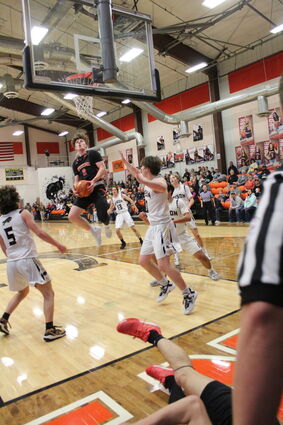 Above left: Burns Bronc No. 2, Caden David soars to net to score against Buffalo Bison!!

The Burns Broncs Boys basketball team entered the regional play-offs in the number four seat looking to improve on their standings and make it to the state tournament. It wasn't going to be easy as the first team they drew was the number 2 seated Buffalo Bison in the northern conference. The Broncs knew they would have to be on top of their game to get the win.

The Broncs started the game fast and furious. Jackson Kirkbride and Caden David each hitting three's and Isaac Bloom and Cooper Lakin each hitting two. The Broncs looked like they were on their way to a victory. The Bison were able...