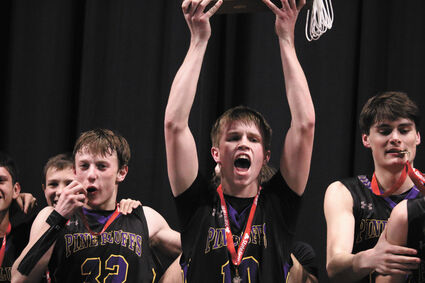 Above: Hornets - No. 32 - Dalton Schaefer, No. 10 Ryan Fornstrom and No. 22 Collin Jessen celebrate their victory with jumps of sheer happiness and shouts of joy.

Next would be the Tounge River Eagles. Again the Hornets scored over 60 points in the game. The Eagles did not soar this day nor could they dive down to try to steal a victory from the Hornets. They fell to the Hornets 62-51. The Hornets were now headed to the championship game.

"There are no words to describe this," Pine Bluffs senior Reed Thompson said. "We worked so hard for this. It's just like a feeling of explosion."

Saturday, the Hornets made sure that streak ended.

Pine Bluffs led 19-17 at the first quarter break and extended the margin to 24-17 at the half thanks to a 3-pointer from Ryan Fornstrom and a slicing drive to the rim from Stu Lerwick. They pushed the lead to nine points on back-to-back mid-range jumpers by Collin Jessen and the 5-foot-10 Fornstrom's layup over 6-8 Toby Schons. The lead was seven (32-25) early in the fourth quarter, but the Rams' Caleb Gibson scored six consecutive points, with the last four coming when he hit a 3-pointer, was fouled, and made the free throw. The Hornets didn't flinch. Lerwick nailed a triple, Dalton Schaefer added an old-fashioned three-point play and Thompson capped an 8-0 run with a floater in the lane. "That was a big turning point," Pine Bluffs head coach Tyler Kimzey said.

The Rams (16-10) never got closer than five points over the final 4 minutes. Pine Bluffs held Big Horn to 4-of-16 shooting from behind the arc and out-rebounded the Rams 25-16. The Hornets also scored 13 points off 13 Big Horn turnovers.

"Nobody on this team is scared of the big moment," said Fornstrom, who scored 17 points and directed the Hornets' offense to near-perfection. The Hornets went on a 6-0 run in the fourth quarter to take the lead for good. "We knew the tempo could be slow because that's how Big Horn likes to play," Kimzey said. "We figured there would be limited possession so we asked our kids to defend and rebound, and that's what they did."

Pine Bluffs held Big Horn to 4-of-16 shooting from behind the arc and out-rebounded the Rams 25-16. The Hornets also scored 13 points off 13 Big Horn turnovers.

"We knew they had good shooters so we just made sure we got our hands up and went after them for 32 minutes straight," Fornstrom said. Lerwick had a game-high 20 points and 10 rebounds. The 6-2 junior was 10-of-12 from the free throw line, including making 4 of 6 in the final minute to keep the Rams at bay.

Congratulations to the Wyoming 2A State Champion Pine Bluffs Hornets