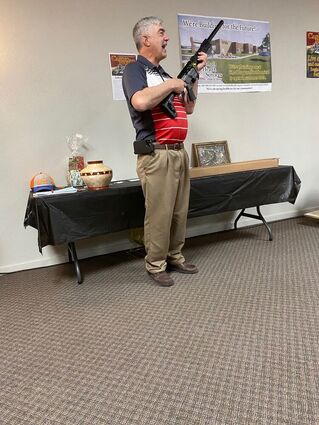 Above left: Kerry Ferguson holds the AR for the crowd to see for the silent auction.

The dice were rolling and cards were shuffling. The Kimball Hospital Foundation had their fourth annual Casino Night at the Sagebrush in Kimball, Nebraska on April 9th.

The Kimball Hospital Foundation was working to raise money for a new cardiac stress testing system at Kimball Health Services.

When you first walked in the volunteers directed you where to go for particular activities. One room was a live auction and food for the night. The food bar had pretzel knots, nachos, two kinds of wings: BBQ and buffalo, and veggie trays. Once everyone received food and their energy was up for the ni...