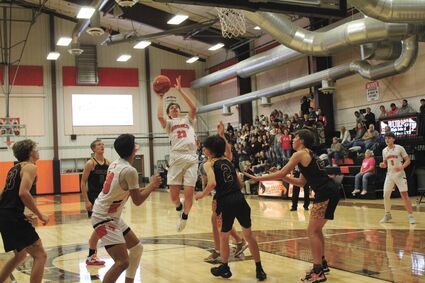 Above left: Burns Bronc - Jackson Kirkbride No. 23 goes for the basket.

When you are good people notice. Two of the Burns Broncs basketball program players have been selected to the Panhandle Prep program All-Star teams. On Wednesday, Panhandle Prep announced the rosters for the All-Star basketball games on Friday, May 27 at Gering High School. The girls' will kick off the doubleheader at 5:30 p.m. with the boys immediately following.

The name is a bit deceiving as they are not a Nebraska only organization. They pull players from Torrington, Hayaninis, Southeast, Lingle-Ft Laramie, Burns and a host of other locations.

For the boys side Jackson Kirkbride was selected to be on the Red Boys-Home team. Both players were stand out players during the season with both players getting Regional and State awards.

Congrats to both players and Coach Ward for this amazing accomplishment.