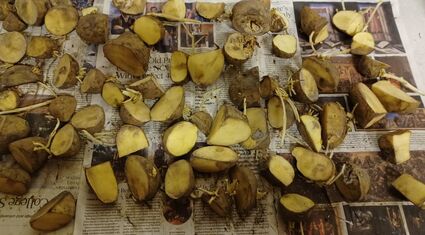 Above: Preparing seed potatoes for planting.

French fries, mashed potatoes, hash browns, baked potatoes, potato chips...few vegetables have a greater diversity that the potato. This is my favorite vegetable and with as many as are sold in this country I'd guess that you probably like them pretty well, too. The potato is one of the few vegetables that originated in the United States and migrated around the world. In fact, after being introduced to Ireland it saved the country from famine on many occasions. Of course there's always another side, too. At one point Ireland had become so dependent on the potato that when the crop failed in...