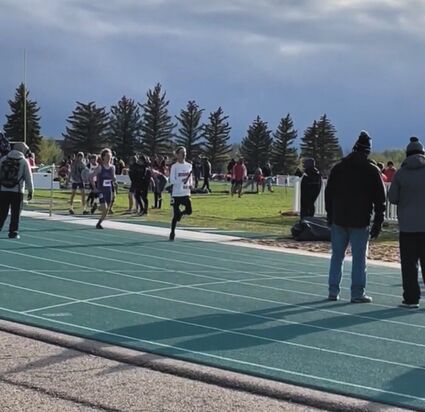 Above: Burns Bronc Spencer Smith runs the final leg of the 4x800 to place his team in sixth place. His teammates were: Mason Medley, Jaspur Nusbaum and Mason Terry.

The Burns Broncs boys track and field team traveled to Casper, Wyoming to compete in the 3A State Championship meet held last week. The team did very well placing at least one athlete in the top 10 in almost every event. Jackson Kirkbride is now the 3A State Champion in the triple jump and the 4x400m relay team are the state champs.

Jackson Kirkbride showed everyone at the meet that gravity did not affect him. He was able to jump 41ft 6.75in in the triple jump to take first place and become the state champion in the event. The 4x400m relay team of Jackson Kirkbride, Cody Hape, Spencer Smith...