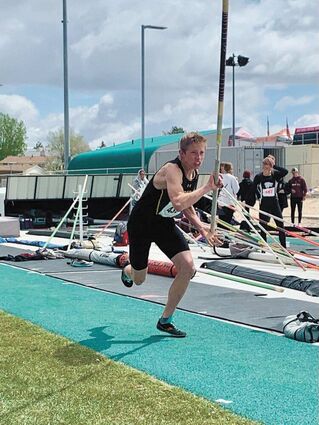 Above: Carson Rabou takes off with full determination that paid off for him to take 1st place in the pole vault with a vault of 11 feet four inches.

The Pine Bluffs Hornets boys track and field team went to the state championship meet held in Casper, Wyoming last week. The Hornets have two track members that are state champions. Stuart Lerwick and Carson Rabou both took first place in their events. When all the dust had settled the Hornets had two of the events that they placed first and second. And except for the dashes and 800m run the Hornets had someone in the top 10

Carson Rabou vaulted 11ft 4in in his run to take first place in the pole vault. Rabou also did well in his other events placing third in the 300m hurdles finishing in 4...