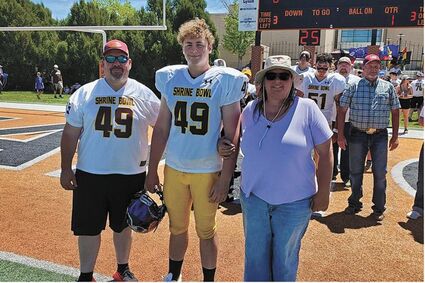 Above: John Winslow, Cody Winslow No. 49 for the South team, and Jennifer Winslow.

The 2022 Wyoming Shrine Bowl was held last Saturday in Casper. It was quite the event for the Burns athlete who was able to compete in the game. Cody Winslow played on the South team and unfortunately the South lost to the North by a score of 37-3.

This would be the 49th time the game had been played and the North team has dominated the series with a total of 26 wins, 19 losses and three ties.

The South started out with a goal line stance that stopped the North from scoring early in the first quarter. However after that it was pretty much all North. The North scored 21 points in the first...