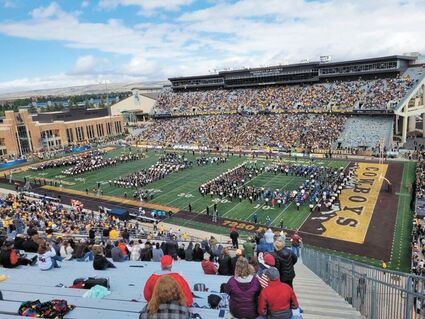 Above: Members of sixteen high school bands participate during the halftime show at the University of Wyoming game against University of Northern Colorado.

The instruments were warmed up and the drums were ready for a beat. The Pine Bluffs Band when to Band Day at the University of Wyoming football game. There were over 1,000 kids throughout of state of Wyoming participating at half time at the Wyoming Football home game.

Over 22,000 people attended the game and cheered the bands on and on a really good "NOTE" (no pun intended)Wyoming won that day against the University of Northern Colorado from Greeley, Colorado. The score was 33-10.

The bands played two songs that day. First was Bang! By AJR. This song is a pop song about some weird middle g...