Sixth Annual Kite Festival a soaring success with the wind 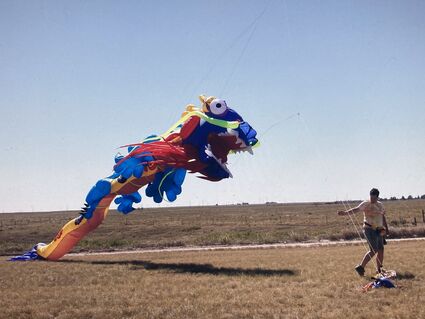 Above: A participant from Pueblo, Colorado prepares to lift his "dragon" kite into the air.

The skies were filled with flying objects, all of the identified. The sixth annual Kite Festival was up on the bluffs of Pine Bluffs, Wyoming.

Kites were invented in Asia around 9500-9000 B.C. Benjamin Franklin did an experiment with a kite in 1752. Kites have been used for example to start flying.

Kites can made simply with two sticks and material covering the sticks with string tied to it. But now there are kites kits and a huge multitude of different designs. Some kite are designed to be animals moving with the wind.

At the sixth annual "End of the Trail" Kite Festival in Pine Bluffs the...