Broncs take down the Patriots 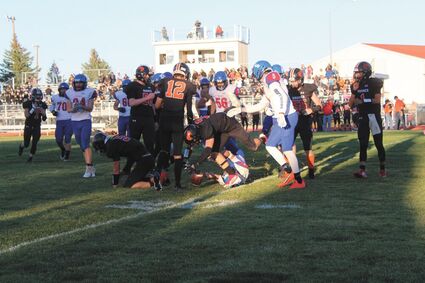 Above: Burns Broncs No. 3 Cooper Lakin goes for the ball which was a "fumble rooskie" against the Sundance Patriots during the second quarter.

The Burns Broncs varsity football team is on a winning roll winning their second game in a row against the Upton/Sundance Patriots. The game was the Broncs homecoming and senior night so there was a lot of expectations. The Broncs did not disappoint but according to coach Romsa "it was a sloppy game". They will have next week to practice and tighten up some of the problem areas before their matchup against the Herders next Friday.

The Broncs started off slowly. After kicking off to the Patriots both teams held and forced the other to punt. On their second possession the Patriots took the b...