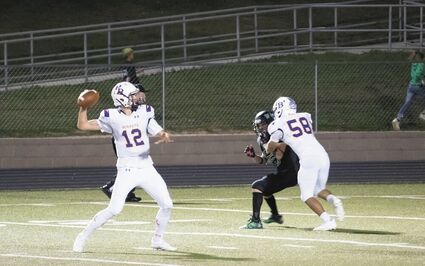 Above left: No. 12 of the Pine Bluffs Hornets - Stu Lerwick, quarterback looks for an open player to throw to while No. 58 Diego Paniagua comes in for defense.

The Pine Bluffs Hornets Varsity football team continued their race for the state championship last Friday with a battle against the Moorcroft Wolves. The battle was one sided as the Hornets dominated the Wolves as they have with their last three opponents. The Hornets offense was on target and relentless. Their defense was tight and brutal as they held their opponents to only eight points the entire game.

The Hornets scored four times through the air and three on the ground. In the first quarter with the score 0-0 Stu Lerwick hits #7 Abe Serrano for a 31 yard pass and run to set up the Horn...