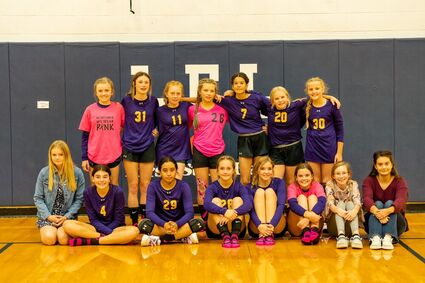 Congratulations to the Pine Bluffs Junior High volleyball team who competed in the SEWAC volleyball tournament on October 8th. According to Coach Forbes, the team went into the tournament ranked third. Their first game was against the Burns Broncs. The Hornets easily beat the Burns Broncs to move on to the second round. In this game they faced the Lingle Doggers. The Hornets had lost to the Doggers twice before but today would be the Hornets day. They beat the Doggers to move on to the championship game against the Southeast Cyclones. Unfortunately, the Hornets lost to the Cyclones. The Hornets took second in the SEWAC conference.

According to coach Forbes,  "The girls played the best volleyball they have played all year. We are super proud of them. It was a great season." 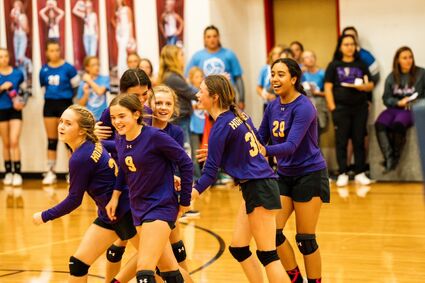 Right: The Junior High Lady Hornets give each other kudos for taking second place at SEWAC.