Hornets stay No. 1 against Lingle Doggers 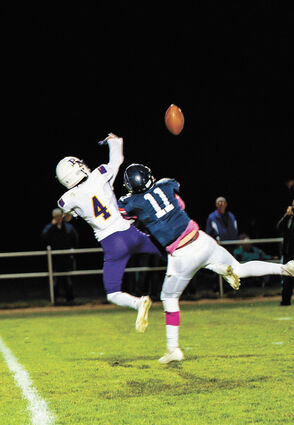 Above left: No. 4 of the Pine Bluffs Hornets - Shawn Shmidl RB flies high to grab the ball as a Lingle/Ft. Laramie Dogger (11) attempts to stop him.

The number one ranked football team in the 2A conference took on the number 3 ranked team in a head to head battle in Lingle/Ft Laramie against the Doggers last week. The dominate Pine Bluffs Hornets varsity football team rolled over the Doggers like they have for their last six games. At present time there does not seem to be any team in the conference that can stand up to the Hornets. In the last three games they have scored over 50 points per game. In the game against the Guernsey team they scored 61 points. The Hornets offense has been unstoppable. The only team that has come close was...