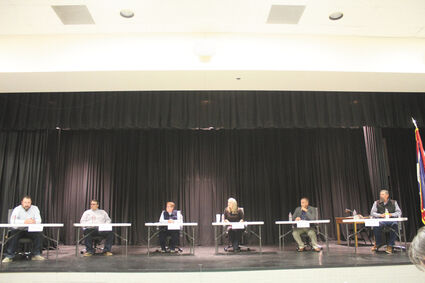 The stage was set at the Burns High School Commons. On October 18th at 6:30 p.m. the Burns American Government senior class hosted a School Board Candidate Forum.

The senior class students wrote out twenty questions. The event began with a meet and greet with the school candidates with refreshments provided. The main questions started at 7:00 p.m. with Johnny Mercer the Language Arts teacher at Burns High School who read the questions to the candidates. Each candidate had a short time to answer the question. At the beginning the candidates got to introduce themselves and state who they are for two minutes.

Cody Nusbaum who is running for At Large started the introductions. He has been in Wyoming for twenty years and he is Vice President of sales for Capital One Roofing. Nusbaum is running for the school because he feels there are big issues that are coming up.

Micheal Lerwick was next running for At Large. He has lived in the district for his whole life. Lerwick had two great uncles in the first graduating class in Albin where he had attended school. He has

five children in the district. Lerwick wants to be sure that the values of Laramie County School District # 2 match the district stakeholders values. That we are beholden to those values that are pushed upon us as we teach our children.

Kendra Roeder is running for At Large. She is originally from Kearney, Nebraska. Roeder started teaching in 1979. She came to Pine Bluffs in 1988. Roeder retired in 2018. She kind of keeps her hand in the pot doing a variety of things for the school. Roeder is an educator. She has been on one side of the desk and she would like to try the other side. Roeder would like to be a voice for the students and teachers.

Billie Wilson is running for area D. She spent her first year learning about being a school board trustee. How the school board works, how school districts are ran, about state statutes, and the history of things. Wilson feels like she has a good foundation. She is excited to continue to building our district in the direction state holders want to go. Wilson has been in the district almost 30 years. She has four children that have been through the school. Wilson is committed to the community.

Seth Heinert is running for the At Large. He began thanking the seniors for putting the forum on. Heinert thought is was a cool event. He is a fourth generation Wyomingite that grew up in the northwest part of the state. He has been an educator for his whole life. Heinert works for an educational consulting company. His motivation to run for the school board is be of service. Heinert thanked them for the opportunity at this forum.

Fred Macy is running for At Large. He is a fourth generation farmer. Macy graduated from Pine Bluffs High School. He has experience on different boards.

The first question was what role the candidates will take on the board? Nusbaum is going to speak up if he has a strong feeling about the subject. He wants to work with the board together. Lerwick wants to be an advocate, to have the students best interests at heart and the best education that they can get. Roeder is problem solver. She wants to contribute her understanding of education. Wilson's role is a communicator, to make sure the state holders have the opportunity to communicate. She likes to be part of team work and also Wilson is the question asker. Heinert is usually the idea guy and tries to solve the problem. Macy's role is representing everybody's interest in the district.

Questions continued on what your primary role would be on the board? About changing board policy during the school year? Higher graduation rates? Standardizing testing? Budget cuts in the future? Should activities play a part in the school system? Expanding activities in inner district? Growth concern in the school? Increasing communication throughout the district? Teenage mental health? Opinion on the four day week? Make the school safer? These were some of the questions asked.

Each candidates answered the questions they could. If they did not have an opinion they stated that. The bottom line was, they where excited about the questions. They where thrilled to show how they will fit in the school district. Only one candidate is on the school board of trustees already. Wilson has her best interest for the teachers, students, parents and the school district. As for the new candidates, they are excited to help the district with new ideas and concerns.