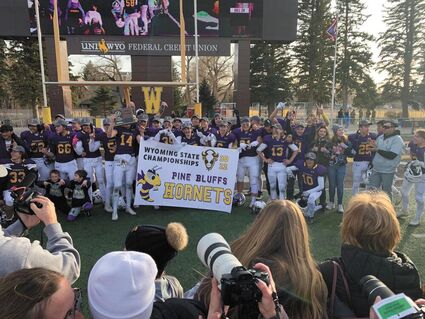 Above: The Pine Bluffs Hornets gather with their trophy and banner as Wyoming State Champs 2022 as they are surrounded by family, friends, and cameras. Congrats Hornets!!!

The Pine Bluffs Hornets Varsity football team made it to the 1A 9-man state finals against the Shoshoni Wranglers. The Hornets entered the game undefeated. This game was destiny as the Wranglers were the first team that the Hornets faced and beat this season. The Hornets beat the then ranked #1 Wranglers in an epic battle that would be replayed at the end of the season by a score of 34-26. That was the closest game that the Hornets had all season until the play-offs. All of the other games that the Hornets played were blowouts. Against Guernsey they scored 61 points and held the Vikings s...