Joyful singing and story telling at 'A Hometown Christmas 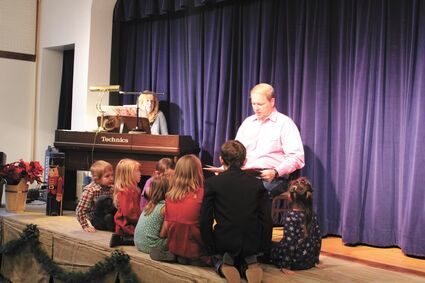 Twas an afternoon of beautiful music, wonderful singing and laughter from the children and audience at 'A Hometown Christmas' concert held in the Historic High School on Sunday.

The concert was organized by the United Methodist Church of Pine Bluffs.

"This use to be an event the church did for years under the talent of Shirley Lemaster." stated United Methodist Church pianist, Joleen Marquardt. "Shirley had organized this Christmas concert for so many years, and after her passing, it went by the way side, and of course with COVID and all, we have not had a Christmas concert in a while." Marquardt added.

Marquardt went to new Pastor - J. R. Atkins with the idea of bringing it back, but opening it up to all the local churches and community. He liked the idea, and soon plans were made and visits to other churches were done to get more community involvement.

Participating in the concert, was Paul and Melinda Gibson, from Crossroads Community Church, as well as Heather Bacerra and Pam Miller from St. Paul's Catholic Church.

The Gibsons would first sing 'Noel' and then later come back on stage to sing 'Mary Did You Know?'.

The concert started out with "A Christmas Potpourri' on the piano by Joleen Marquardt. When she finished, Pastor J. R. welcomed everyone and talked a little bit about community. He did a fine impression of Lawrence Welk and Ed Sullivan. He was joyful and made everyone laugh on occasion.

Pastor J. R. pulled the young children on stage and read them the story of "A Cowboy Christmas" which is a take off of The Night Before Christmas. This was extremely entertaining as the children joined in with statements and question. It was thoroughly enjoyed by everyone.

The audience was pulled in to join in the singing with a sing along for several songs. Afterwards, all were invited out to the gym area for some cider and homemade cookies from several volunteers.

There is hope to have this becoming an annual event again, with more joining in.