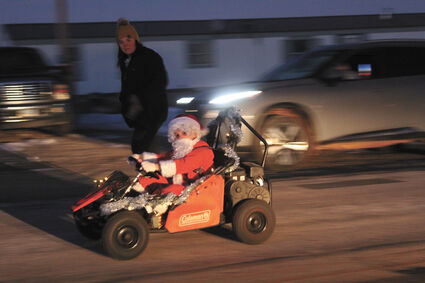 Above: A young miniature "Santa" (Joshua Northington) rides in the Hillsdale Christmas Parade.

The cars were lining the streets of Hillsdale and the people were waiting for the annual Christmas parade on December 17th at 5:00 p.m. The Laramie County Fire District #6 lead the parade. The parade had two different 4-H groups. The Rowdy Riders and the Hillsdale Tiptoppers. The Rowdy riders built a float lined with lights and music coming from the pickup that was pulling the float. They also had Mrs. Wyoming America riding on their float. The Hillsdale Tiptoppers commandeered Santa Claus to ride on their float. That was not the only Santa Claus in the parade though. There was a mini Santa...