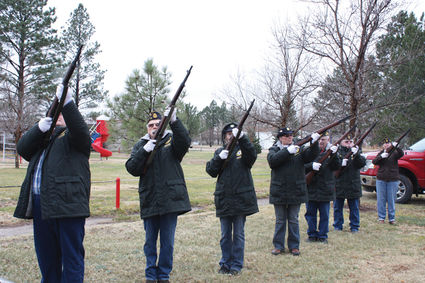 Members of the Louis E. Canady American Legion Post 60 from Pine Bluffs gathered at Calvary United Methodist Church in Bushnell, Neb. to pay respect to Wayne Marshall, a U.S. Army veteran who passed away on March 16.

Marshall served honorably during the Korean War from 1951-1953, driving a fuel truck while stationed in Alaska. He and his wife Roberta moved to Bushnell in 1997 and lived there until moving to Vista Villa in Kimball, Neb. this past August.

During a 30-minute memorial service inside the church, which included a flag folding ceremony, mourners went outside where the Post 60 firi...