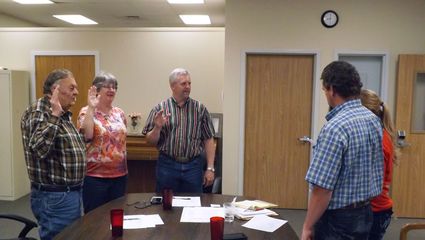 Being sworn in May 11, for their terms as councilmen and mayor of Albin are from left: Incumbent Bob Anderson, Kate Randall, first time councilwoman, Mayor Kelly Krakow and Incumbent Councilman Kelley Kriz. Behind Kriz is his wife Jillian Kriz who is administering the oath of office.

Following the May 2 Albin town election, the victors were sworn in at the conclusion of the regularly scheduled town hall meeting, May 11.

Newcomer to Albin politics, Kate Randall took the oath of office. She is replacing Jerrie...